Hold Each As We Fall

Rajni’s first full-length show, hold each as we fall was performed by Gemma Brockis, Meredith Evans, Triona Kennedy and Rajni Shah. Exploring the desire for recognition, the story was loosely based on the myth of Echo and Narcissus and featured two performers in dresses, one performer in pyjamas, one performer dressed as a bear, and two microphones with very long leads. The show was created over six months but designed to only ever be performed once: 11pm, Sunday 18th April 1999. 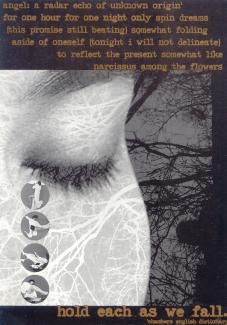 other collaborations and research projects